COVID-19’s impact on the Musculoskeletal (MSK) Industry will be significant in the near-term, and greater than we have seen in past recession and economic downturns. Unlike past recessions, COVID-19’s impact on the MSK industry is unique because (1) it is global, (2) there is a mandatory deferral of all elective and non-essential surgeries and (3) there are local and regional “stay home” orders preventing – or at least discouraging – patients from visiting physicians in person. As the MSK industry fights through and recovers from a sudden and severe downturn related to the COVID-19 response, we expect to see two distinct waves of the recovery cycle – the first will be a return of procedures for patients suffering with such severe MSK pain that they can no longer tolerate putting off surgery but were mandated to do so. This wave will yield a quicker and sharper, but limited, uptick in MSK surgical procedures.

During this first wave we will also likely see an increase in non-surgical approaches to managing various MSK conditions, such as steroid, HA, PRP, and related injections, which can provide some mitigation of pain for those patients who were planning to move to a surgical intervention were it not for the onset of the COVID-19 pandemic.

The second wave will emerge as the rest of the patients, whose procedures were deferred, regain their “economic health”. As the economy returns to growth and unemployment numbers decline, patients will regain the ability to afford the deductible and any other out-of-pocket expenses they may incur as a result of their procedure, and/or those who lost their jobs and insurance coverage will eventually get back into the workforce and have coverage for these procedures again. This recovery curve will likely look more like the slower and steadier recovery curves coming out of past recessions. Throughout this second wave, we also expect non-surgical approaches to continue to be higher than in the pre-COVID period, as these patients wait for surgical inventions – either because of OR / surgeon capacity constraints, or because it simply takes time to rebuild their savings to cover any OOP costs for the surgery or take unpaid time off from work.

In the mid-to-longer term however, after concerns over COVID-19 spreading dissipates, this segment is resilient and sure to rebound to pre-pandemic levels and continue the steady growth trends we have seen over the past 10 years. Between now and that full rebound timeframe, MSK companies must find solutions to minimize the impact to their financials, staff and operations, and engage differently with surgeons and patients to (a) temper the downturn to the extent possible, (b) ensure the fastest possible rebound, and (c) position themselves to gain share preferentially over competitors as the return to “normal” business unfolds.

Part One: Impact of Past Economic Downturns on the MSK Industry
Historically, the musculoskeletal industry has experienced the negative impact of recessions and economic downturns, but the impact has not been as severe or lasted as long as in many other segments of the MedTech industry. Naturally, the MedTech segments most at risk during economic downturns are those that: (1) provide primarily cash-pay treatments and/or fully elective procedures that patients may opt out of for financial reasons (e.g., aesthetic medicine) and (2) capital equipment manufacturers which often see delayed purchasing cycles for expensive capital equipment (e.g., surgical robots, imaging equipment, radiation oncology equipment). Conversely, procedures which address emergent conditions (e.g., appendicitis or tumor resection) are not impacted nearly as much in these recession periods. On a spectrum of emergent (e.g., appendectomy) to completely elective (e.g., aesthetics procedures), musculoskeletal procedures fall somewhere in the middle. [NOTE: For more insights on where other MedTech segments fall on this spectrum, read our colleagues’ blog post titled, “COVID-19 and the Medtech Industry: Procedure Deferral Index,” which will be launched next week.]

While many musculoskeletal procedures are often considered “elective,” that does not mean that they are “optional.” There is generally a finite period of time for which procedures can be delayed without clinical consequences, but they eventually do occur. Patients moving to surgery in the MSK arena, have generally endured years of pain, passed through numerous pain and symptom management treatments, and reached a point where their pain and joint or soft tissue damage becomes so severe, it can no longer be put off. If forced, these chronic pain patients may be able to delay surgery a bit longer by relying on non-surgical options (e.g., increasingly potent pain medications, localized injections), however eventually they need to move forward with their surgical plan. Examples of procedures that fall into this category of being able to be delayed, but only for a finite period, are many of the joint replacement and spinal fusion procedures. During past economic downturns, studies have shown that some of these patients do delay their procedures specifically for financial reasons (cost and/or coverage concerns), though eventually they do proceed with surgery (Klein GR 2013 Am J of Orth).

Another category of MSK patients are those with more acute injury, immobility, and severe pain who need to be addressed in an immediate or near-term timeframe and should not be delayed. Whether a patient has a completely torn ACL or rotator cuff, is rendered completely immobile due to injury or pain, or has suffered a fractured bone, the result is that — even in times of economic uncertainty — these procedures need to continue as scheduled. The short-term impact of a recession on these more urgent MSK segments is, thus, minimal.

A review of MSK procedure volumes in the US during the 2008-2009 recession (defined by the US National Bureau of Economic Research as the period of negative GDP growth starting in December 2007 and ending in June 2009), showed some slowing of growth in procedures from one year to the next, however all three of the selected MSK segments shown in Figure 1 still realized positive year-over-year growth. 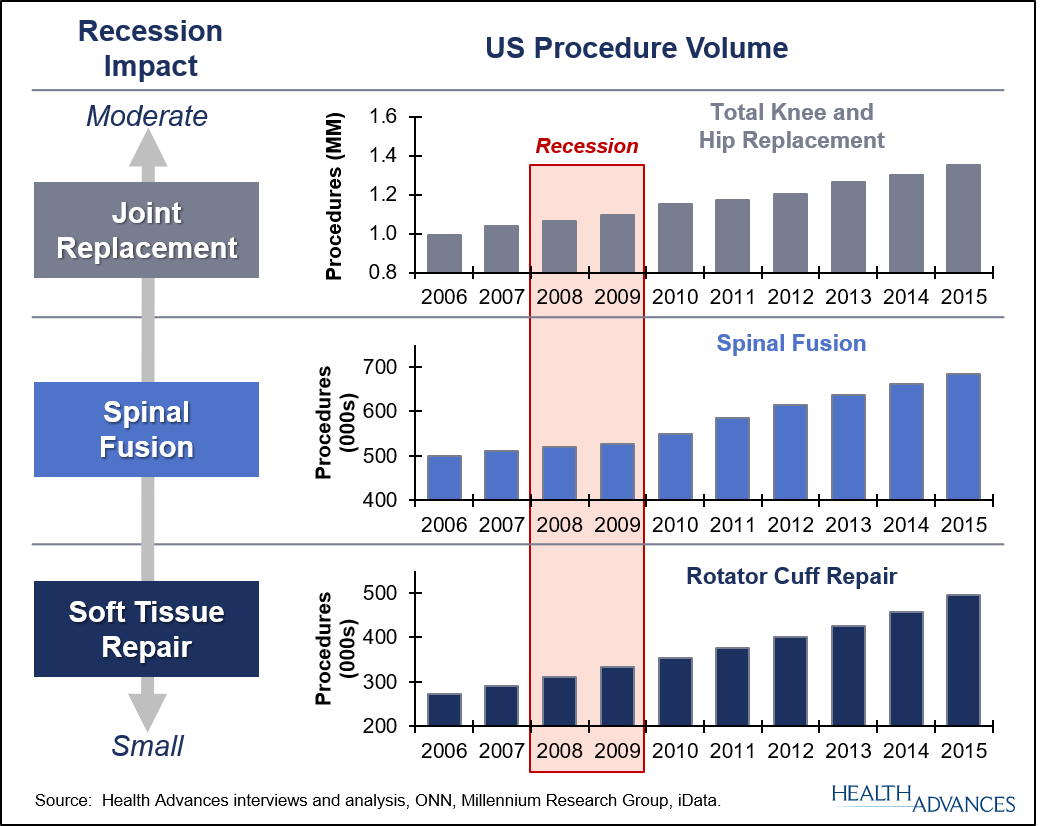 Total annual US manufacturer revenues across various MSK segments also increased over the same time period, as seen in Figure 3 below. So, the growth in procedures was not offset by equal or greater pricing declines, even during this recession period. Instead, procedure growth, coupled with positive pricing trends, led to significant gains for the MSK industry through the 2008-2009 recession. US revenues for hip and knee replacement and spine procedures grew ~13% and ~18%, respectively, in the two years from 2007 to 2009. Trauma, a market that would be expected to be least hit by economic downturns, given the urgent nature of those procedures, grew a total of ~24% over the two years from 2007 to 2009.

While annual growth rates of MSK procedures remained positive, when evaluated on a more granular basis – both by quarter and by company, there were at least a few quarters and companies that saw periods of negative growth during the recession (see Figures 4a and 4b).

Figure 4a: Quarterly Impact of Recession on Hip Market

Figure 4b: Quarterly Impact of Recession on Knee Market

Naturally, some of these variations stem from each company being in a different competitive positioning during the specific recession period, with respect to the maturity vs. “freshness” of their product portfolios in each area, as well as differences in their sales force sizes and models (i.e., internal vs. contractors / distributors). Yet, one could infer that those companies that were the “strongest” going into the recession (i.e., large and growing faster in one or more segments than competitors) were more resilient and better able to weather the downturn (e.g., Biomet and DePuy in hips, and Biomet in knees) than those with slower growth in one or more segments going into the recession (e.g., Stryker and Zimmer in hips, and Zimmer and DePuy in knees). It is also noteworthy that the smallest player in this group of 5 OEMs – Smith & Nephew – realized the most volatility during this period, starting with strong growth rates in both hips and knees pre-recession, and then realizing a series of low or negative growth quarters subsequently.

Other MedTech segments – particularly those where procedures are truly elective and optional – saw much more significant declines in YoY growth rates and procedure volumes during the recession than did the MSK sector. No segment demonstrates this more clearly than the aesthetics market, which realized considerable declines during and in the few years after the 2008-2009 recession. Over the two-year period from 2007-2009, total surgical and non-surgical aesthetics procedures declined 15% in the US and continued to decline through 2011 as seen in Figure 5.

Figure 5: US Aesthetic Procedures and Revenue

Furthermore, the total aesthetics market sales declined a total of 33% in over that same two-year period, and it took until 2012 for the aesthetic medicine market to rebound to pre-recession levels. Many of the services included in these procedure volume figures (breast augmentation, nose reshaping, eyelid surgery, liposuction, tummy tuck, Botox injections, soft tissue fillers, chemical peels, laser hair removal, etc.) are truly elective and optional and not pursued by patients during economic downturns.

The US capital equipment market was also impacted by the 2008-2009 recession, though to a slightly lesser extent than aesthetics. During the recession, willingness to invest significant capital in large equipment purchases dropped and overall CapEx spending at hospitals was reduced by ~20%. When looking closely at a few, prominent capital equipment companies (e.g., Intuitive, Varian), growth was flat from 2008 to 2009 (see Figure 6a).

Specifically, in the MSK industry, this same stagnation was observed in placements of Mako’s newly launched robotic system. The growth in new placements during the recession was much lower than the period preceding the recession or after. Fortunately, Mako, like other capital equipment companies, was able to quickly rebound to meet the pent-up demand, after the economy started to improve in 2010 (see Figure 6b).

Figure 7: Impact of 2001-2003 Economic Downturn on MSK and Aesthetic Procedures 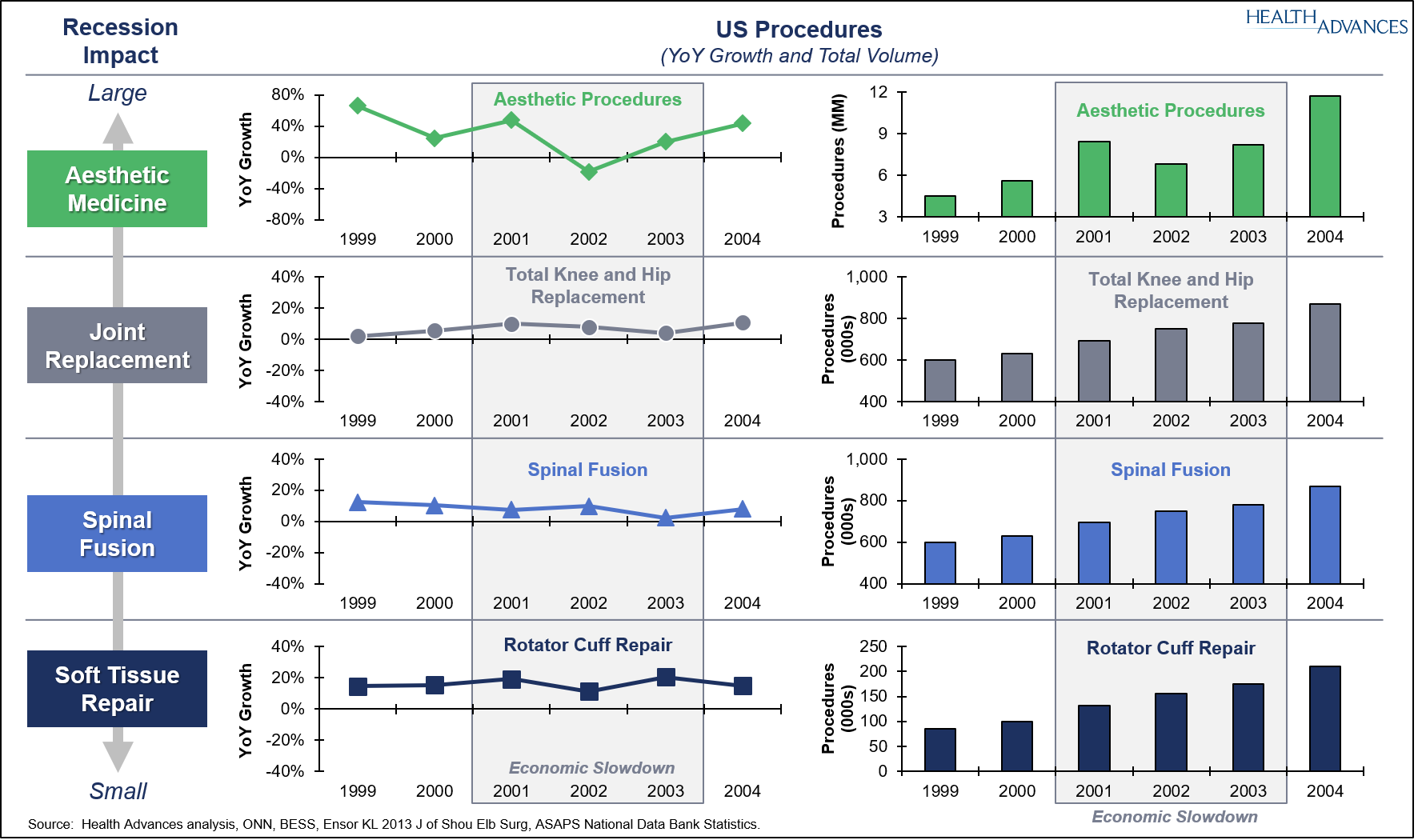 This post is part of a series of articles about the impact of COVID on various healthcare markets. Please click here to see the rest of Health Advances’ coverage. Below is a summary of our findings across articles.